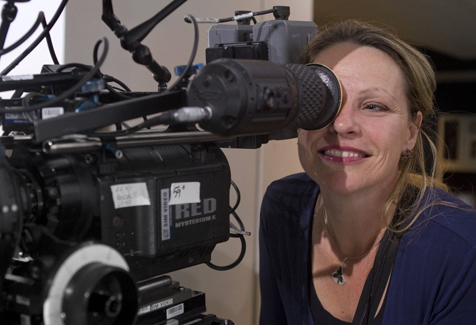 Working in the media of film, paint and interactive space, Emmy nominated Jill Sharpe is a multifaceted visual storyteller.

As a filmmaker she has created an award winning body of work in the documentary genre, which has been presented internationally at film festivals and broadcast in over 30 countries.

As a painter, Sharpe has had solo shows at the Georgia O’Keeffe Museum’s Education Annex in Santa Fe, Emily Carr House in Victoria and has presented talks at the McMichael Gallery in Ontario on her work.

Prior to film Sharpe worked in international marketing in London, Tokyo and Sydney. She also founded the non-profit organization: Youth to Everest in Toronto and ran two environmental expeditions to Mount Everest in the early 90’s. Sharpe has working fluency in French and Spanish and dual EU/Canadian citizenship.

Jill Sharpe is a Canadian based visual artist working in the mediums of paint and film.   She began painting in oil at the age of 13 and has been exploring image through the lens of film for nearly 3 decades.   As a filmmaker she has created an internationally showcased body of work, which has won several awards (see film bio for full list).   As a painter, Sharpe has been fortunate to study under many accomplished artists and has begun to show her work internationally.

In 2001 she embarked on a 3-year painting study in Mexico – joining Galeria 910 under the tutelage of Nicias Aridjis.   In 2006 Sharpe traveled to France to study under revered Dutch Painter Jos Vandeven.   And in Canada she mentored with Canadian landscape painter Sheri Bakes from 2008 – 2010.  In 2012 Sharpe was invited to exhibit her paintings at the Solas Art Festival in Glasgow Scotland. That same year she released her film BONE WIND FIRE about the creative process of three painters (Frida Kahlo, Emily Carr and Georgia O’Keeffe) which was nominated for an Emmy; awarded at the International Festival of Films on Art (FIFA) and screened at several major art museums including the Dulwich Picture Gallery in London and the Lincoln Centre in New York and

In 2012 Sharpe became interested in combining her film and paint exploration more symbiotically and created a new series of paintings inspired from frames of her film – BONE WIND FIRE. The resulting series was invited for month-long solo shows at the Georgia O’Keeffe Museum’s Education Annex in Santa Fe and at the Emily Carr House in Victoria.   In 2013 Sharpe was invited to give a presentation about her work at the McMichael Canadian Art Collection near Toronto. In 2015 she had her first solo commercial show at the Madrona Gallery in Victoria BC.

Sharpe’s paintings are inspired from the intricate beauty she sees in nature and the innate energy hidden from view.

A versatile thinker and creator, she’s also interested in experimenting with media in gallery environments and developing new technologies for immersive engagement.

In her early 20’s Sharpe worked on the ground level of interpretation as a tour guide.   She has led over a thousand hours of guided tours through the streets of New York, Toronto, the Canadian Rockies and the World Expo 86 site in Vancouver. Her first hand experience entertaining and educating visitors through physical environments help Sharpe craft impactful interactive experiences.

60 minute Architectural Walking Tour for Florida Southern College, Lakeland, Florida – the site of the largest collection of Frank Lloyd Wright buildings in the world (in progress).

For prominent multi-media client out of New York servicing cultural institutions in the US. (Credits available with signed non-disclosure agreement only), 2015.